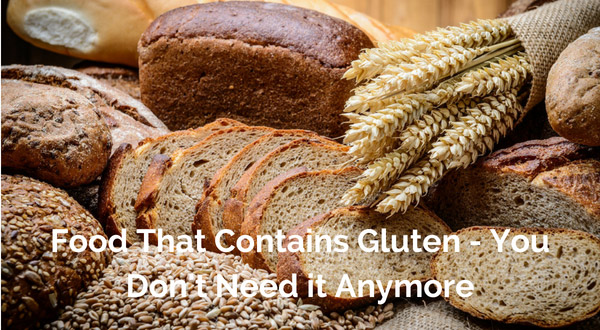 Before you move onto a gluten-free diet, it’s important to understand what foods contain gluten. This will be a huge help in developing a smart meal plan and learning just what you’ll be giving up. It’s not quite as many things as you think and there are a number of alternatives out there that are better for you in a number of ways that also taste great! A celiac disease diet will force you to give up some old favorites, but it’s not the end of tasty food.
What is gluten really anyway? Gluten is a substance found in many kinds of grain that gives dough an elastic texture. It’s a mixture of two proteins. The word ‘gluten’ is Latin for glue. Basically, gluten is what gives the dough its ability to rise and maintain its shape. It also gives products with gluten in them a chewy texture. Understanding this can give you a good idea of some of the foods that contain gluten and the food to avoid on a gluten-free diet.
Gluten has been a part of food preparation for thousands of years. Because of this there are a whole lot of foods that contain gluten. This is just a basic overview of some common foods. As a general rule, similar items will have similar ingredients, including gluten.
Let’s start with the basics. The ingredients that contain gluten are:

These are all grains and starches. Gluten is a fundamental part of their structure and chemistry. They are the source of the gluten found in other foods.

Flour is often a part of their preparation, so there is gluten in these foods, even if they seem to have nothing to do with bread or dough. Even coffee and tea can have gluten in them if they are flavored or are instant versions. Gluten products have been a part of cooking for a very long time and it is almost ubiquitous.
Also, do not eat playdough if you are trying to stay gluten-free. You probably should not do so, anyway, but it will be even more unpleasant if you have celiac disease.
What other items should you avoid if you’re on a celiac disease diet? There are a number of sauces and other food additions that contain gluten. The old fast food favorites of ketchup and mayonnaise contain gluten. So does anything with malt in it or soy sauce (an ingredient in teriyaki sauce). Most marinades also have gluten as an ingredient. Gravy and Worcestershire sauce have plenty of gluten in them. Non-dairy creamer has gluten as do many other recent diary substitutes. Salad dressing and syrup contain gluten. You should also check your vitamins and supplements since some brands use gluten as an ingredient. The same goes for medications and even lip balm.
Gluten is also found in a lot of alcohol. Vodka, often produced from grain, has gluten, and so does beer which is also made from fermented grains. Anything with malt liquor in it, like many wine coolers, contains gluten.
Gluten is a sneaky thing. It’s found in all sorts of foods. You can even find it in cosmetics and shampoos. Its consistency is part of why it sees that much use. It helps hold these products together when they’re applied, either making it easier to use them or allowing them to do what they’re designed for. You can find gluten-free versions of many of these products if you look for them in your local grocery or convenience store.
Gluten can hide under other words. It’s found in a number of things that are ingredients onto themselves. Keep an eye out for the following gluten containing terms on nutrition info labels:
• Avena sativa
• Brown rice syrup
• Caramel color (usually made from barley)
• Cyclodextrin
• Dextrin
• Hordeum distichon
• Hordeum vulgare
• Hydrolysate
• Hydrolyzed malt extract
• Hydrolyzed soy protein
• Hydrolyzed vegetable protein
• Maltodextrin
• Modified food starch
• Natural flavoring
• Phytosphingosine extract
• Samino peptide complex
• Secale cereale
• Triticum aestivum
• Triticum vulgare
• Tocopherol
• Vitamin E
• Yeast extract
If you’re starting a gluten-free diet, it’s very important to look closely at food labels. These ingredients tend to be listed in very small letters under the Percent Daily Values, though they can also be listed elsewhere on the label. The lists are usually packed in pretty tight and it takes some extra time to read them. As annoying as this can be, it’s going to be a big help in creating your celiac disease diet and getting on the road towards better health.
There are some foods that contain gluten normally that can be found without it if they have the correct label. Gluten-free beer, for instance, is becoming more and more common. You can find gluten-free oats. Awareness of celiac disease and technological developments have come together to open up a whole range of options for gluten-free diets. You can find gluten-free potato chips in almost any grocery store, for instance, and even in some gas station markets. Chefs are exploring gluten-free options more and more. Many companies see gluten-free as a good thing and openly advertise that their products don’t contain gluten. Just because you’re trying to avoid gluten doesn’t mean your options are limited. You just have to stay smart and stay aware of food ingredients.